The Walker on the Cape
by Mike Martin
Baico Publishing

Look at the cover of The Walker on the Cape. An exquisite site, isn't it? That's Grand Bank, Newfoundland, the setting of this tale of RCMP, power and corruption. But it's mostly the story of life on the rock. Because it's the setting, the people, and the way of life in a small Newfoundland community that makes a difference in this first mystery by Ottawa writer Mike Martin. He writes about what he knows and that's his home province.

The discovery of the body of an old man on the trail overlooking Grand Bank shakes the community when it's found he was poisoned. Therein lies the tale of old secrets, power that corrupts, and lies that lead to ruined lives. At the heart of it all is RCMP Sergeant Winston Windflower, a First Nation officer who finds himself posted in far away Newfoundland. He's a really nice guy who's facing what sounds like his first major investigative challenge, which he handles with intelligence and understanding.

Along the way we meet Sheila Hillier who owns a local cafe, the officers and civilian staff at the small detachment, and many of the locals who form the fabric of the community. Sheila's a nice woman and seems a natural pairing for the bachelor sergeant, and this provides a peak into his private life. It's to be hoped that any future instalments give us a deeper understanding of what it means to be an aboriginal in the RCMP. We get a glimpse with his morning ritual of smudge bowl and medicine bag but knowing more about his past and his beliefs would help give depth to the man. 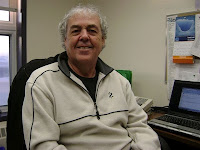 Martin has thought through his plot and provided a mixture of motives and suspects to keep it moving forward. And, he's done his homework when it comes to RCMP procedure. He has a lot of room to grow his characters which should make the second book (I'm assuming and hoping it's a series) well worth looking for.

Enjoy an armchair visit to Newfoundland!