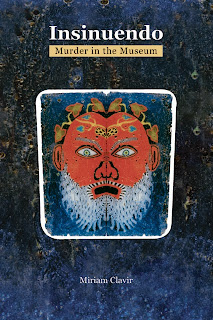 Miriam Clavir's first mystery novel has all the right ingredients: a determined middle-aged (that really appeals to many of us) female heroine, a museum with all the attendant inside info on its workings; and a terrific setting, the UBC campus in Vancouver, B.C. It also has an intriguing death that may or may not be murder.

For Berry Cates, almost a fully-accredited art conservator, the internship at the Museum of Anthropology (MOA) is an ideal job and she's hoping to make it permanent. Recently divorced and graying, she desperately wants to make the most of this new beginning to her life. However, when a visiting art dealer and expert in antiquities drops dead and what was first thought to be a heart attack starts looking more like murder, Berry finds herself dragged into a new role as sleuth.

For starters, her supervisor, Reiko looks like a prime suspect and Berry's worried that without Reiko, she's without a job and her much needed credits. But what Berry finds is much more than she's bargained for. It seems Foley also had a reputation for some shading dealings in the art world. And long-time friendships may mask a deeper sinister bond. Not trusting anyone she's working with, Berry follows the leads to bogus statues and revenge. Bruised and disillusioned, Berry eventually tracks down the killer but at what cost?

Clavir has created a gutsy, witty mature female sleuth who doesn't back off. Hopefully, Berry Cates will be returning. This novel will really appeal to anyone with a fascination for the behind-the-scenes workings at a museum, from the nitty-gritty of art conservation to the politics of self-preservation in a museum environment. Miriam Clavir's own background shows in the amount of background information she deftly weaves into the tale. By the way, the MOA on the UBC campus is a real site; the murder is fictitious.
Posted by Linda Wiken at 12:00 AM