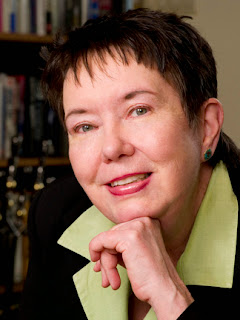 Gail Bowen, Canadian author of the Joanne Kilbourne mysteries series.
Early in 2009, I entered an early draft of Safe Harbor, my first Pat Tierney mystery, in Britain’s Crime Writers’ Association’s Debut Dagger competition. The contest is open to English-language writers around the world who haven’t had a novel published. The CWA didn’t get back to me, which meant, in a competition that attracts hundreds of entries, that the manuscript hadn’t made its shortlist.
A few months later, Gail Bowen was in Toronto, doing a stint as writer-in-residence at the Toronto Reference Library. I submitted the first 20 pages of Safe Harbor for a manuscript evaluation. I met with Gail, when she’d read my pages, and that meeting had a big impact on the novel—and my writing career.
“This book needs to written in the first person,” she said. “We need to know what Pat Tierney is thinking and feeling every step of the way.”
I felt like a light had been switched on in my head. Safe Harbor is a murder mystery, but it’s also the story of Pat’s personal journey. She learns about her late husband Michael’s infidelity and starts to get on with her life. I realized I needed to get deeper into Pat’s head. And the best way to do that was to let her tell the story.
I rewrote the book in the first person. And right from the start, I knew I’d made the right decision. I felt energy emanating from the story that hadn’t been there before. I showed several chapters to members of my writers’ group, and they agreed.
The following year, I entered the rewrite in the 2010 Debut Dagger competition. Same title and same storyline as my previous submission, but this time told in the first person. That year Safe Harbor emerged as one of 11 novels—out of about 1,100 submissions—that were shortlisted for the award. I was astonished and thrilled. Being on that shortlist has been one of the highlights of my writing life.
Gail has been extremely supportive of my writing. She wrote a fabulous endorsement for Safe Harbor, and another one for its sequel, Black Water. When she was reading the Black Water manuscript, I still hadn’t come up with a title for the novel and I asked her to see if a title came to mind in the course of her reading. Her husband, Ted Bowen, came up with Black Water, which is a perfect title for the novel.

I’m writing the third Pat Tierney mystery, which opens about three months after the end of Black Water. It is the beginning of summer in Ontario cottage country. Pat has another family problem on her hands when she learns that a frail, elderly woman is missing in the community. The book’s working title is Red Kayak, in keeping with my other “watery” titles, Safe Harbor and Black Water. But it may change by the time the manuscript is completed.
I’m also working on a Pat Tierney short story for the Mesdames of Mayhem’s second crime fiction anthology, a sequel to the Mesdames’ Thirteen. “The Sweetheart Scamster,” my Pat Tierney story in Thirteen, was a finalist for a 2014 Derringer Award.

3. In what ways is your main protagonist like you? If at all?

Pat Tierney is a financial advisor, while I’m a journalist. She’s a mother who spends a lot of time worrying about her family; I don’t have children. She’s also a much nicer person than I am: kind, compassionate, always tries to do the right thing although she doesn’t always succeed. No, I have to say this character is not based on personal experience. But maybe, just maybe, she’s the person I’d like to be.

4. Are you character-driven or plot-driven?

I’m a character-driven writer and I find it impossible to come up with a detailed outline for the entire book—with plot turns and twists, and themes all mapped out—before I start writing. I’ll start with an external conflict that my characters can react to, but how they do react has to ring true their personalities and how they see the world around them. I also know that the conflict will be resolved by the end of the book, but I’m usually unclear exactly how it will be resolved.
This makes the going slow. I have to get to know all the characters in the story and understand how they view the world around them. After the first draft is written, I need to do a lot of cutting and rewriting to ensure that the story moves along and makes readers want to turn the pages.
But there’s an element of discovery in this process that I enjoy. Sometimes a subplot emerges that I hadn’t envisioned, and because it came about organically, it dovetails nicely with the rest of the story.


5. What do you hope readers will most take away from your writing?

I hope they will have an enjoyable read. In my opinion, the primary role of a storyteller is to entertain.

6. Where do you see yourself ten years from now?

I see myself writing in 10 years, because writing is what I do. I’ve earned my living writing and editing articles as a journalist for the past 35 years, and in recent years, I have moved into fiction writing. I find that I prefer to create my own stories than to report facts, so I will be focusing more on fiction in the coming years. But exactly what kind of fiction, I don’t know. I need to write stories that resonate with me, and I’ve found that stories have a way of finding me. The trick is to keep my mind open to them.

7. What is one thing your readers would be most surprised to know about you?

I’m pretty open about who I am, what I do and what opinions I hold, so I think that readers who follow my blog and my posts on Facebook have a good idea of kind of person I am. The one thing that might surprise them—and I’ve discussed this in my answer to Question 3 above—is that I am not Pat Tierney.

I can’t read enough crime fiction, especially Canadian crime fiction. We have a wealth of great mystery and suspense writers here in Canada, and I enjoy reading their stories, especially those that are set in parts of the country where I have lived or visited.

9. Give us a summary of your latest book in a Tweet

Rosemary McCracken is a Toronto-based fiction writer and journalist. Safe Harbor, the first novel in her Pat Tierney mystery series, was shortlisted for Britain's Debut Dagger Award in 2010. It was published by Imajin Books in 2012, followed by Black Water in 2013. “The Sweetheart Scamster,” a Pat Tierney short story in the crime fiction anthology, Thirteen, was a finalist for a 2014 Derringer Award.
Jack Batten, The Toronto Star’s crime fiction reviewer, calls Pat “a hugely attractive sleuth figure.”
Visit Rosemary’s website http://www.rosemarymccracken.com/ and her blog http://rosemarymccracken.wordpress.com/