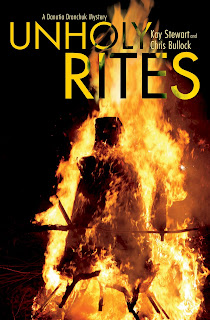 The last time I read a Danutia Dranchuk mystery, the RCMP constable was chasing the bad guys on Vancouver Island. This time she’s in Derbyshire, England, to research methods in crime reduction initiatives and working with the local police. While there, she’s made contact with her friend, Arthur Fairweather, whom she first met three years earlier, in the first book in the series, A Deadly Little List.

Arthur’s mum has died and Danutia travels to her funeral, only to be caught up in Arthur’s conviction that it wasn’t a natural death. It certainly seems an odd place to Danutia, when it’s revealed the town is getting ready for a well dressing ceremony and Arthur’s mum was heavily involved in it along with Celtic rites and rituals.

A series of mutilated goats, used in ritual killings perhaps, weave into a tale of a sketchy minister whom Arthur’s mum didn’t trust, her missing scrapbook, a young boy who goes missing, and a dear, or perhaps not so dear, friend of the deceased who dispenses herbal remedies.

When the brakes are cut in the car Danutia and Arthur are using, the case that really isn’t officially a case, takes on even more sinister tones. And when Arthur is kidnapped and held captive along with the missing lad, it’s up to Danutia and the local constabulary to find them both, before a madman kills them in accordance with the rituals of Old Beltane Day.

The setting is marvelous. Stewart and Bullock have drawn a small English town with it’s eccentric residents and countryside so real, it’s like taking a trip across the pond. The writers have drawn on a wealth of information about pagan rites and current ceremonies, which is all fascinating. And, as Danutia and Arthur join forces to track the killer, they also dance around their mutual attraction. However, when Danutia learns of her promotion to corporal, their evening’s celebration leads to unforeseen consequences.

Kay Stewart and Chris Bullock wortk together when both characters, Danutia and Arthur, are front and center. As a team, they write seamlessly. For the second book in the series, Sitting Lady Sutra, Kay Stewart was the solo author. It’s a strong series with interesting characters and always, unusual plots. I look forward to seeing where the next book takes them. 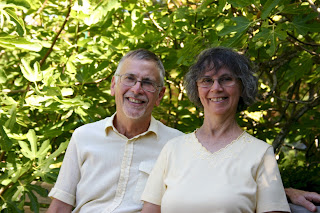 Kay Stewart is the author of police procedurals featuring RCMP Constable Danutia Dranchuk. Unholy Rites, written with husband Chris Bullock, is the third in the series. Kay has also published short stories, personal essays, and writing textbooks. She taught at the University of Alberta before moving to Vancouver Island to devote her time to writing. She is active in the crime-writing community, having served as National Vice President and President of Crime Writers of Canada and co-chair of Bloody Words 2011.
Posted by Linda Wiken at 10:34 PM