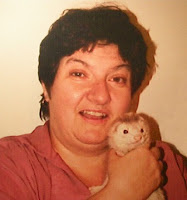 Remember this scene from the 1967 film The Graduate where a family friend explains – in one word – the secret of success in business to a young university graduate? I suggest that the key to success in writing can also be explained in just one word...
Dirt.

Dirt, to me, defines a society and culture, both physically and mentally. Think of your city. What do the streets look like? Cigarette butts and discarded newspapers , ratty posters on hoardings, stink from cars/ sweaty bodies/ puke-sweet perfumes, huge puddles of gray slush at curbs? I’ve described my hometown, Toronto, here, but it could be Anycity, The World (although if you’re lucky, your city might have flower boxes, swept sidewalks, and no graffiti).

Several years ago when I first visited Tokyo, I took the pristine, trash-free public spaces as the norm...at least till I saw a single piece of paper lying on the stairs in one of the subways. Suddenly (albeit momentarily), the world fell apart – there was a Serious Wrongness in force here. Seeing a single piece of paper lying on the subway steps in Toronto, on the other hand, would be a clear indication that some maintenance person had been by maybe 30 seconds before. Some cities are clean, some are dirty – it’s the way of the world.

Think of the setting of the book you’re currently working on. What if you turned the setting around – took your grungy city streets and made them clean (or vice versa). What would it do to your characters, your plot, your premise?

It doesn’t particularly matter where or when your book is set. Can you imagine Vulcans on a Klingon spaceship or vice versa? Would Alien (and its spawn of sequels) have worked nearly as well set on the spaceship traveling to the moon at the beginning of 2001: A Space Odyssey?

Character appearances, too, should involve a certain degree of dirt (or cleanliness). Don’t look to most period films (anything prior to the 20th century) where all the actors have artfully torn and dirtied clothing (“artfully” being the operative term here) with perfect, white-toothed smiles and shiny, bouncy, Pantene hair. I don’t think so, folks – I don’t know about you, but I can suspend disbelief only so far. No, you have to go to historical mystery books (or any other historical fiction) to smell unwashed bodies and see rotten or no teeth and open sores on arms.

It is dirt – or the lack thereof – that creates a verisimilitude in books.

There’s more to dirt than meets the eye, though. Dirt goes beyond physical, surface dirt.

When I first started working on my mystery (set in late 12th century England), I couldn’t stand my protagonist. She was, well, a sniveling wimp and just plain irritating, but for the longest time, I couldn’t figure out why. Then it struck me – she wasn’t swearing properly. So make sure your characters talk dirty appropriately for their time and society, whether the swearing is religious-based, sex-based, animal-based, whatever.

There are any number of Websites that cover swearing from all periods and for all classes of characters. If you’re looking for a fun, albeit academic, book on swearing, read Geoffrey Hughes, Swearing: A Social History of Foul Language, Oaths and Profanity in English.

And finally, don’t forget “dirty” beliefs and attitudes – sexism, racism, ageism, xenophobia, religious and sexual prejudice, and the like – for everyone from your protagonist to the most minor character. Some people, as individuals and as a collective, just aren’t very nice, but bigotry (at least in fiction) is interesting to cultivate and definitely builds character.

So let’s have a rousing chorus of “Dirty Little Town” because when it comes to writing, dirt is your friend.

Lagniappe
· Three masters of dirty and grungy settings are Karen Maitland (14th century England), Paul Doherty and any of his pseudonyms (any of his medieval series), and Andrew Vachss (contemporary NYC underbelly).
· Dirty talk in the 12th century involved God’s/Christ’s body – bones, blood, nails, arse. It got so bad that Henry I, son of William the Conqueror, instituted a system of fines for individuals who swore near a royal residence.

Cheryl Freedman was Mothership (first as secretary-treasurer, then as executive director) of Crime Writers of Canada for 10 years until she resigned last year, partly to – what else? – write her own historical mystery. She’s currently a director at large for the CWC as well as a permanent director of Bloody Words, Canada’s oldest mystery conference, www.bloodywords.com, which she’s been involved with since it started 10 years ago. In “real” life, she’s a freelance editor, desktop publisher, and manuscript evaluator.
Posted by Linda Wiken at 6:43 PM

Email ThisBlogThis!Share to TwitterShare to FacebookShare to Pinterest
Labels: dirt